Eating in Japan – Our first trip to Tokyo was an adventure! We absolutely loved the food and enjoyed getting to try all sorts of new things!

Our first full day in Japan we wanted to make sure we found traditional Japanese food for lunch.  My husband had done lots of research ahead of time, so we knew a few places to look for.  Luckily we stumbled upon one of them just in time for lunch.  Tenya is a chain in Japan that serves mainly tendon.  Tendon is tempura style veggies and seafood served over rice that has a soy type sauce on it.  Between the 3 of us we had shrimp, fish, squid, eggplant, pumpkin, lotus root, and green beans.  It was served with miso soup.  I think this put us all at ease, and gave us confidence that we would do well finding food in Japan. 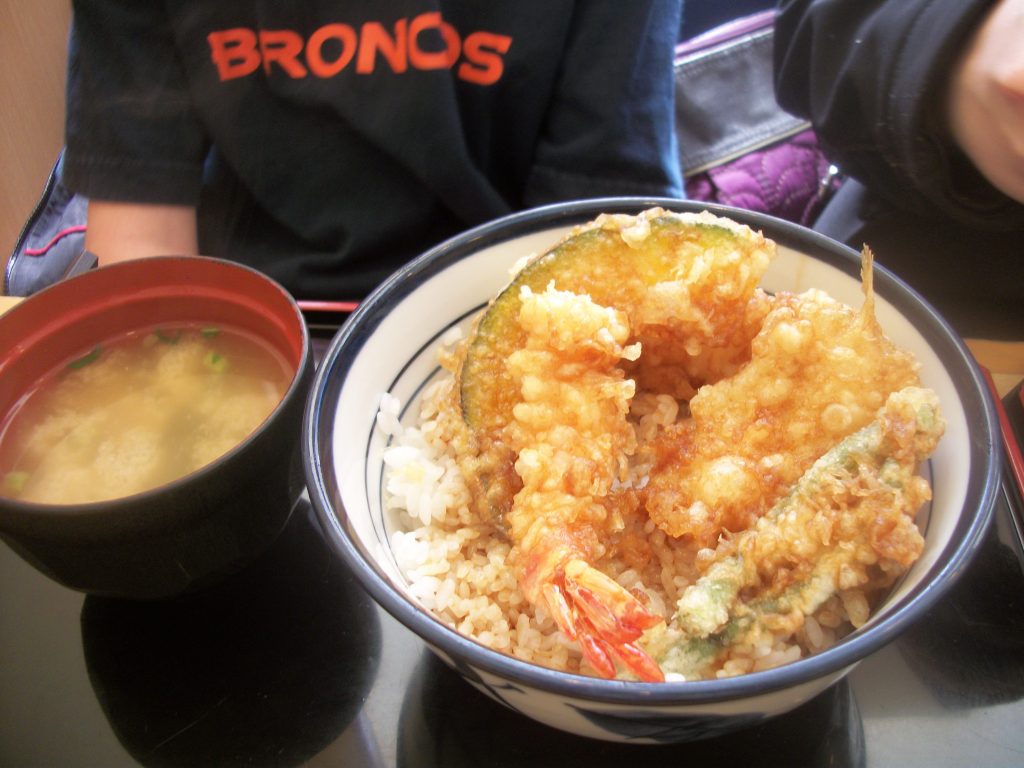 Over the course of the trip we tried lots of different snacks from convenience stores.  They had lots of varieties of Cheetos and Pringles we had never seen before.  Here are just a few of what we came across. 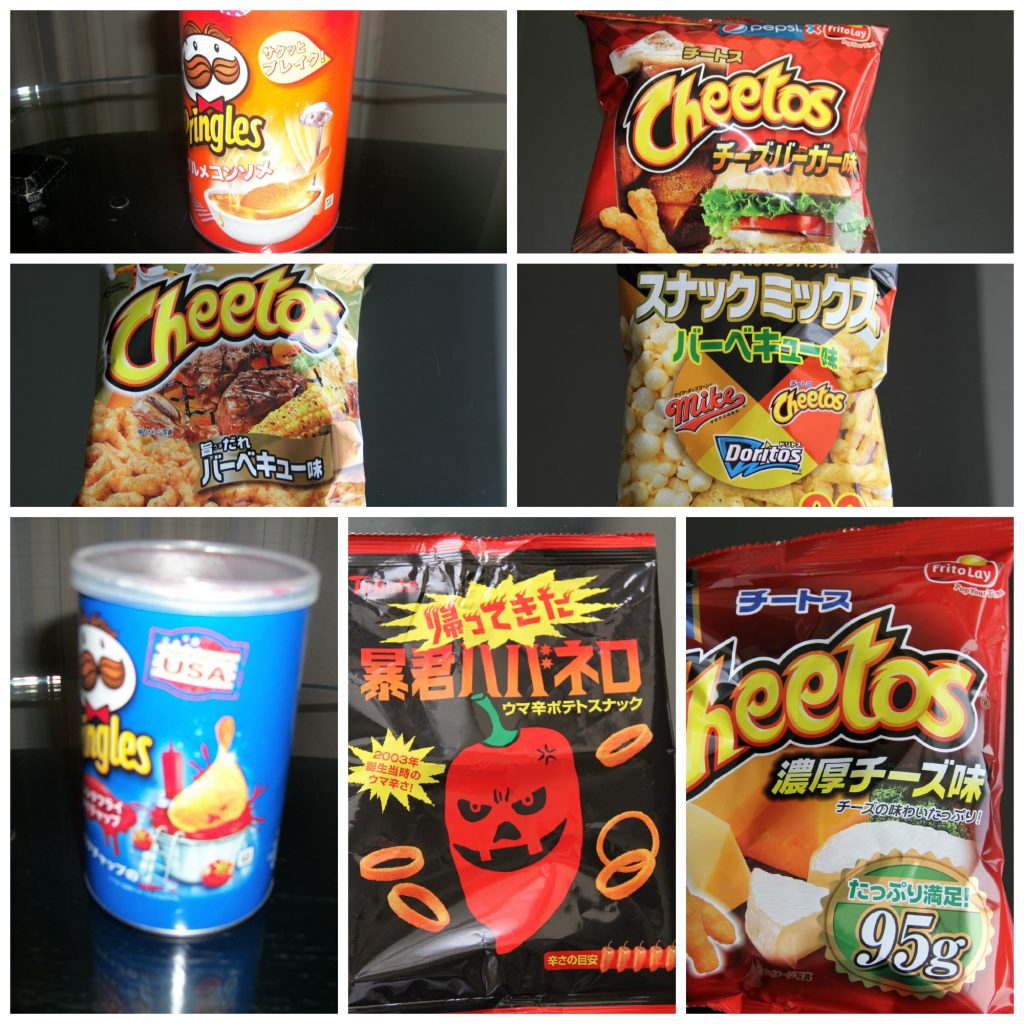 Japan is known for different flavored Kit-Kats.  Green Tea flavored is the most popular, and can be found everywhere.  They have lots of seasonal varieties as well; blueberry cheesecake, rum raisin, wasabi, soy sauce, cinnamon tea and more.  We didn’t try all of the ones that we saw, but here are a few that we did try.  Green tea, waffle, vanilla bean, and dark chocolate.  We also tried strawberry and regular milk chocolate (not pictured).  Milky Way is my favorite candy bar, so I had to try this.  Let’s just say it was not a Milky Way – there was no caramel!  It was basically a Three Musketeers bar. 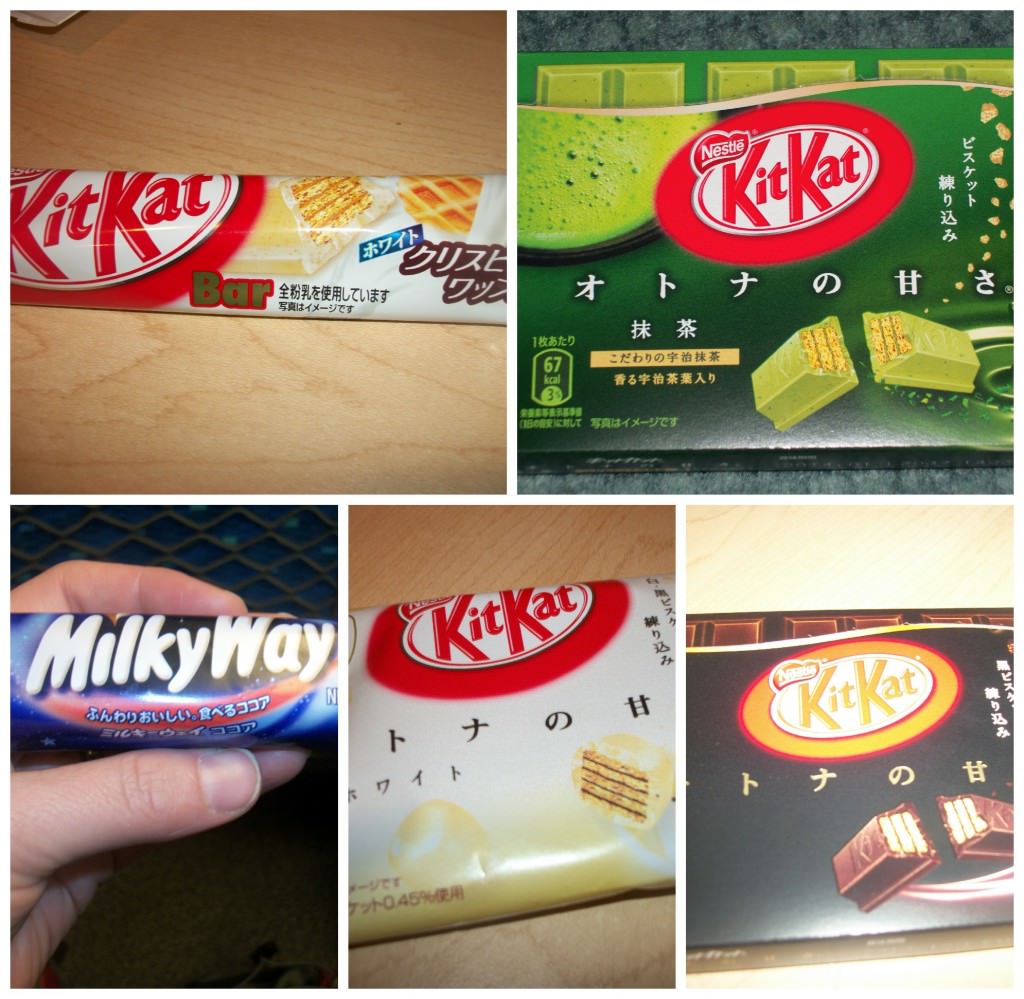 There are quite a few restaurants in Japan that you order by vending machine.  They have a picture menu (or plastic food display) out front with numbers.  Inside you put your money in the machine, and press which number you would like to order.  It prints out a ticket and you hand that to the people behind the counter.  We tried one of these places on our second day.  This was what I ordered; a potato croquette in some kind of broth with noodles.  I had no idea what I was ordering, just picked it based on the picture.  It was not my favorite, my husband ate most of it.  He ended up with a piece of fish in the same broth with noodles.  Our son got fried shrimp over rice. 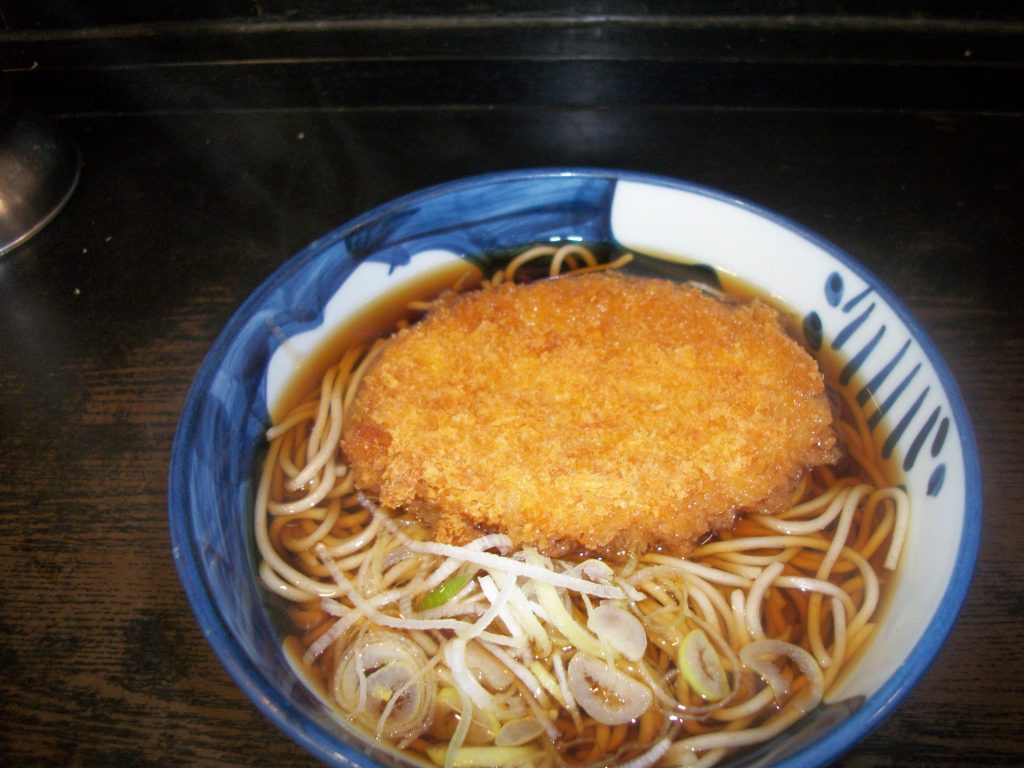 While in Osaka we found our favorite restaurant of the trip.  We were in a mall area, and stumbled on this place.  It is tiny, like most restaurants in japan.  They all have about 15 seats (which is just crazy).  But there are thousands of restaurants to chose from.  This was a tendon place.  You sat at a counter around the kitchen.  They cook your food within 2 feet of you.  The chef literally reaches through the window, and puts your bowl of food in front of you. 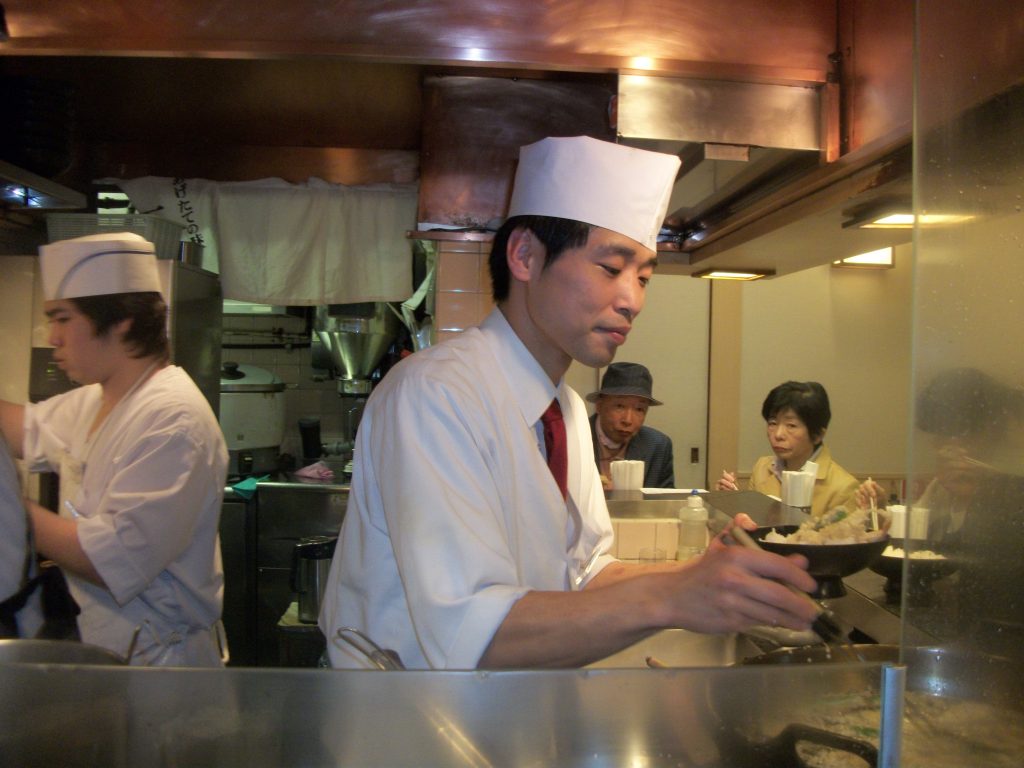 This was the freshest, and best shrimp and veggies we had on the trip. 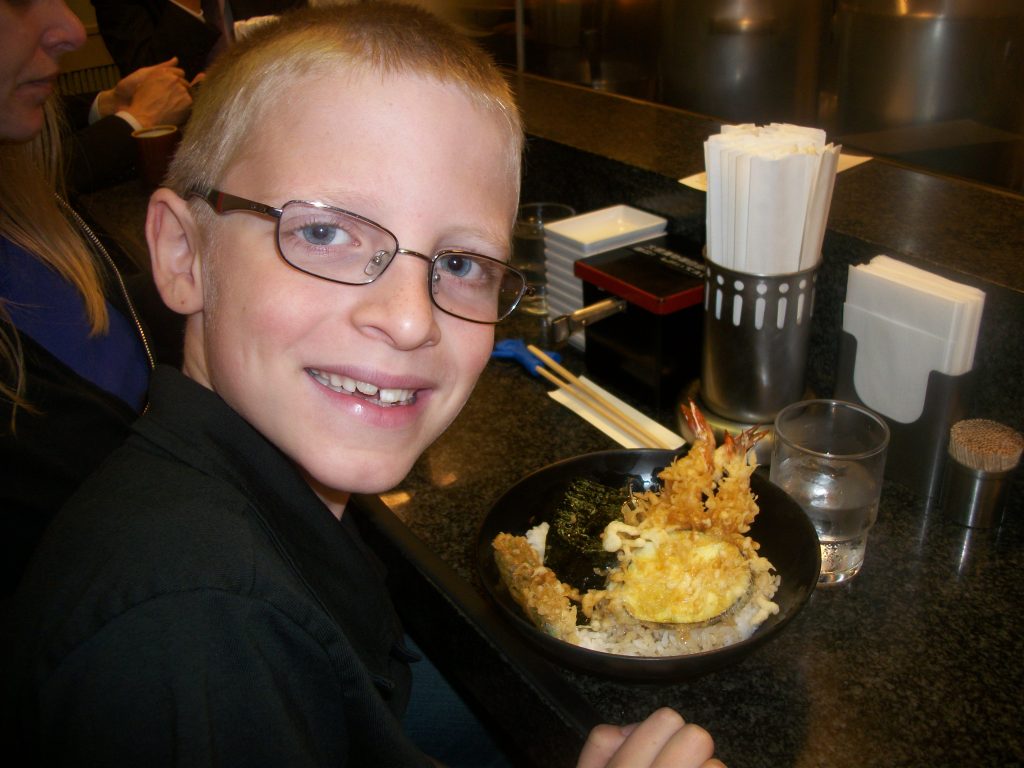 Osaka is well known for Takoyaki and Okonomiyaki.  Takoyaki are balls of dough that are fried, and topped with a barbeque style sauce.  They are typically filled with octopus.  My husband and son liked them, I refused to try them.  After I heard how chewy the octopus was, it was just not going to happen. 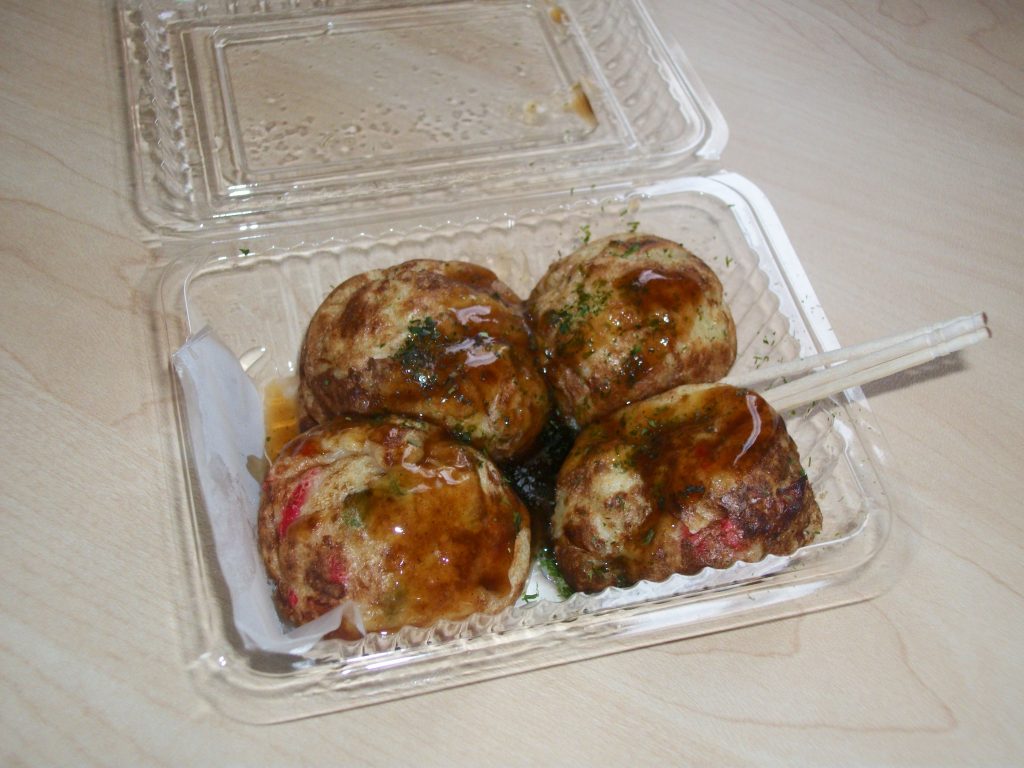 Okonomiyaki is a savory Japanese pancake.  It is made up of mainly cabbage and green onions.  Then it is topped with your choice of shrimp, pork, squid, or a combination of the three.  Then it is topped with a barbeque style sauce, mayo and shredded fish flakes.  My husband also got his topped with an egg.  My husband was a big fan of these.  My son and I were not.  I didn’t realize it was mainly cabbage that made up the pancake.  I am not a fan of cooked cabbage.  But we tried it! 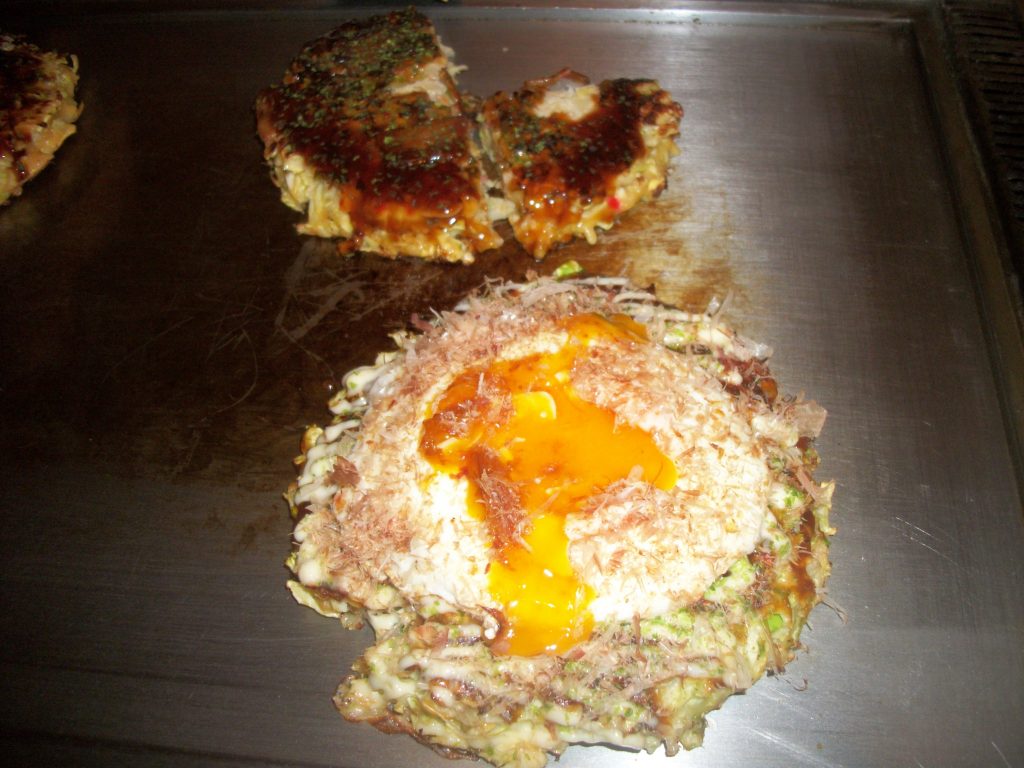 Ramen places are huge in Japan.  This might have been one of my husbands favorites.  We both had pork in ours.  He ordered his with an egg.  This specific place was another vending machine place.  We ordered gyoza (Japanese style potstickers) as well. 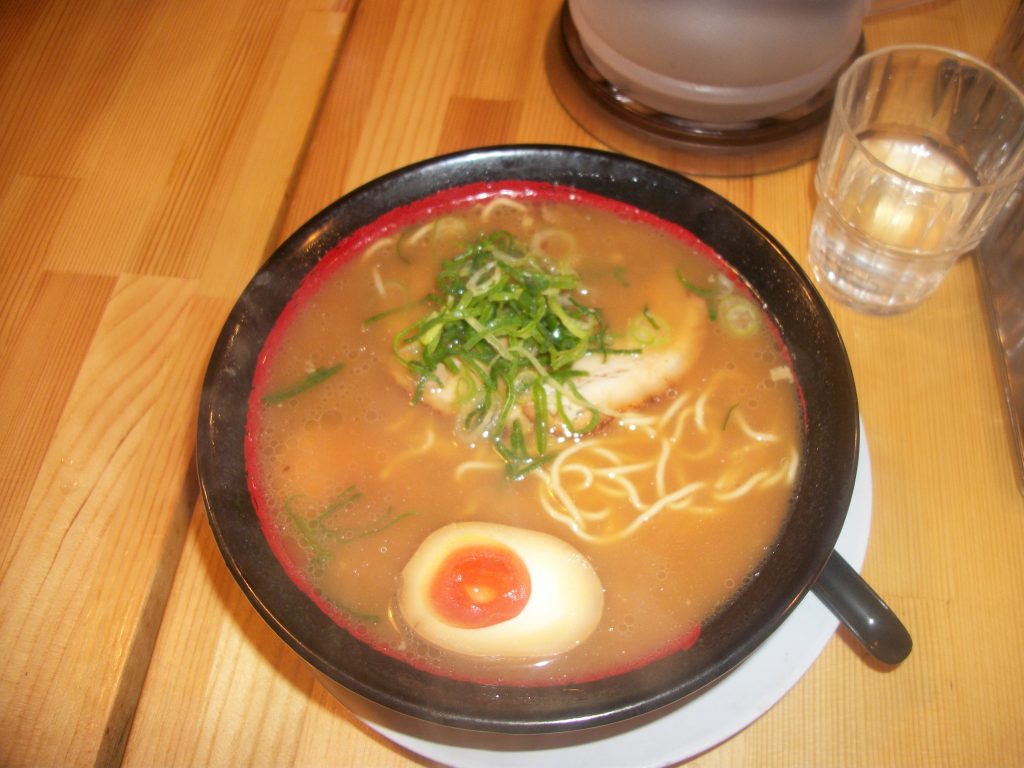 Tonkatsu was the one thing I was really looking forward to trying while in Japan.  It completely lived up to my expectations!  This place actually gave you a bowl of sesame seeds and a mortar and pastle.  You ground the seeds up, and then pour the sauce over them.  It was amazing!!  Tonkatsu is a breaded pork cutlet.  It is served with rice, miso soup, pickled vegetables, and a salad.  We had Tonkatsu one other time on the trip, but this place was so much better! 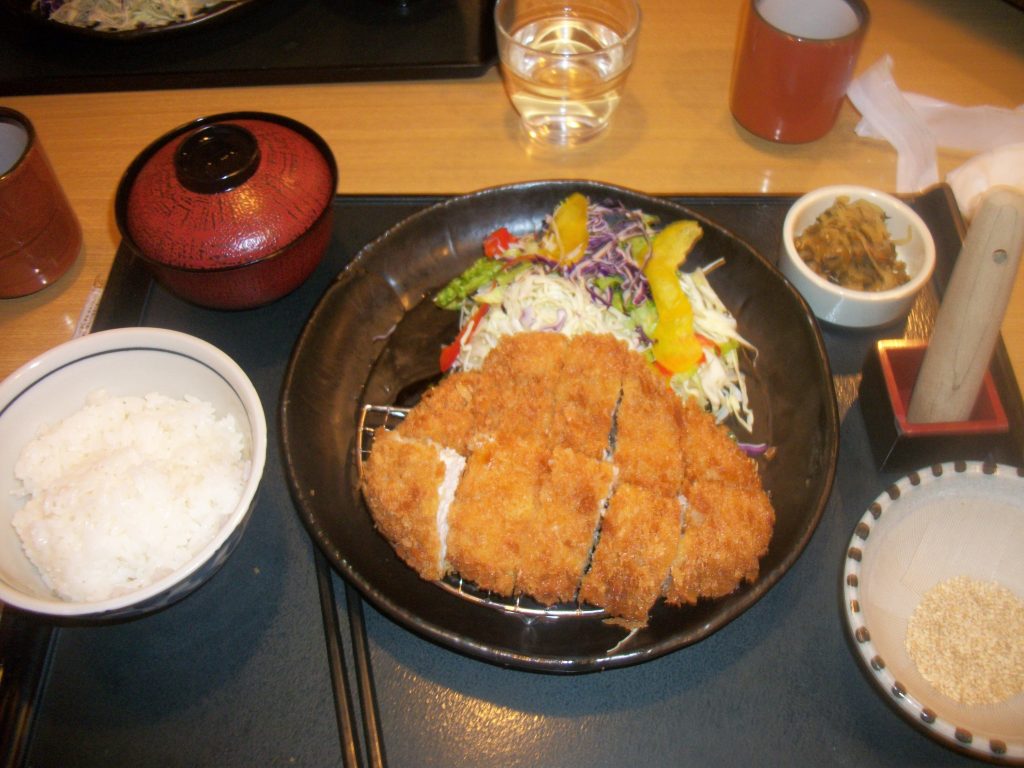 My son’s favorite meal on the trip was something called Gyudon.  Basically it is a beef bowl.  Thinly sliced beef and onions are served over rice with a soy type sauce.  My husband also tried a spicy pork version that he really liked. 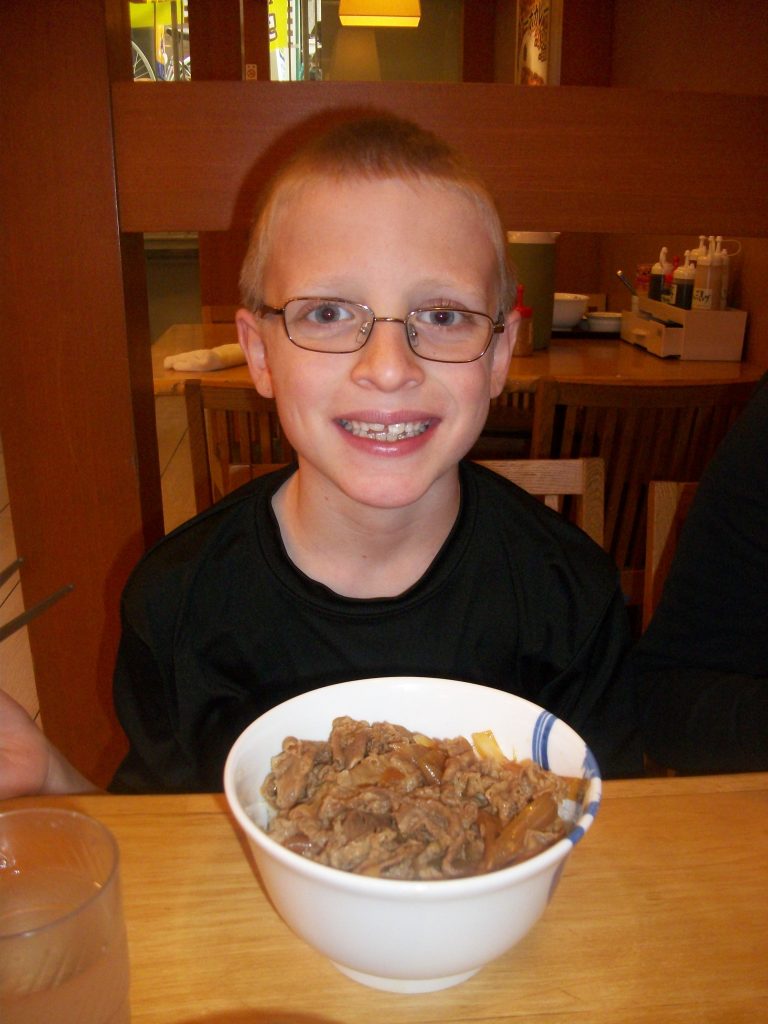 You all know by now, that we are fans of Indian food.  We had read that Japanese curry is completely different, but very good.  We had seen many restaurants that served curry, but none of them look very good.  Finally, I said the pictures can’t do it justice or no one would eat it.  So our last night we went to a place that served curry as well as these fried rice omelets we had seen all over the place.  My husband tried the omelet.  It came with 2 small croquettes on top, and was topped with a chili sauce.  He finished it, but said it was very interesting.  Not sure he would ever order it again. 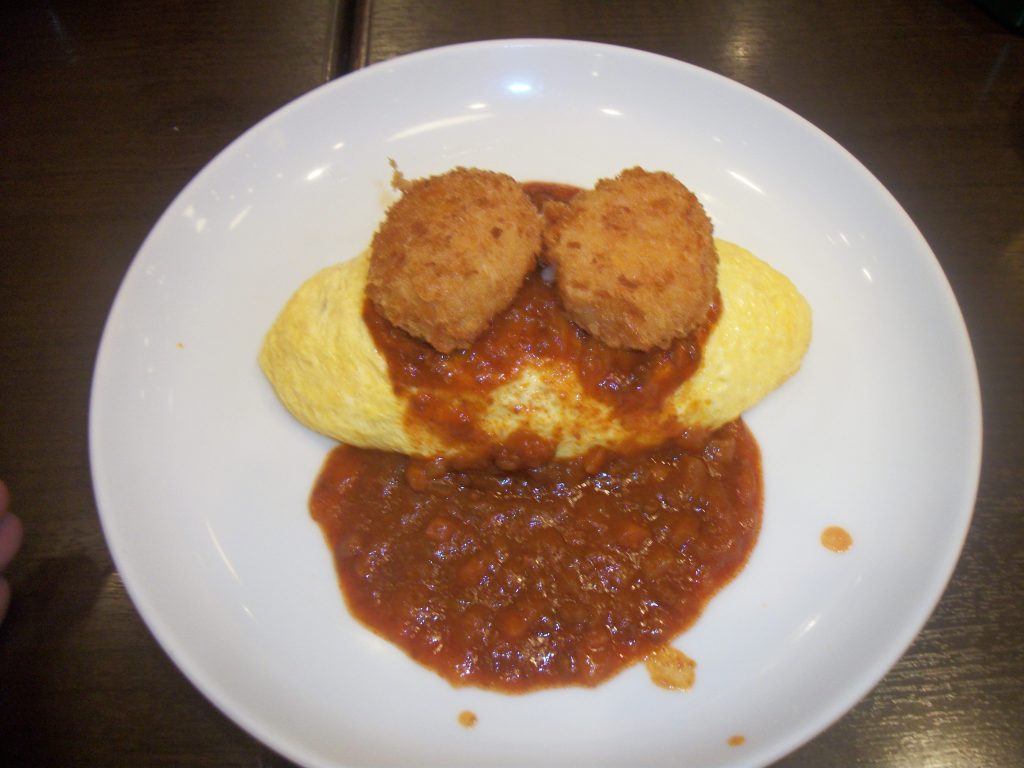 I ordered the pork curry.  The sauce tasted nothing like it looks!  It was nothing like Indian curry, the spices are completely different.  But it was flavorful, with just a little heat.  I enjoyed it, and would definitely eat it again. 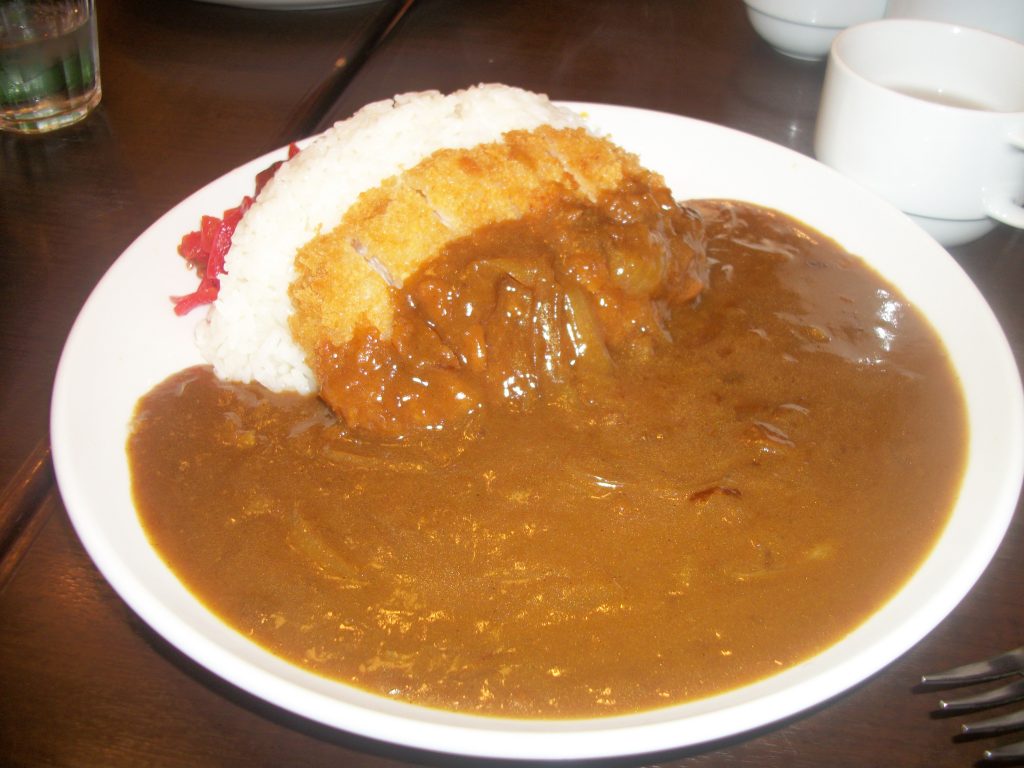 And here you can see my son’s reaction to sushi 🙂 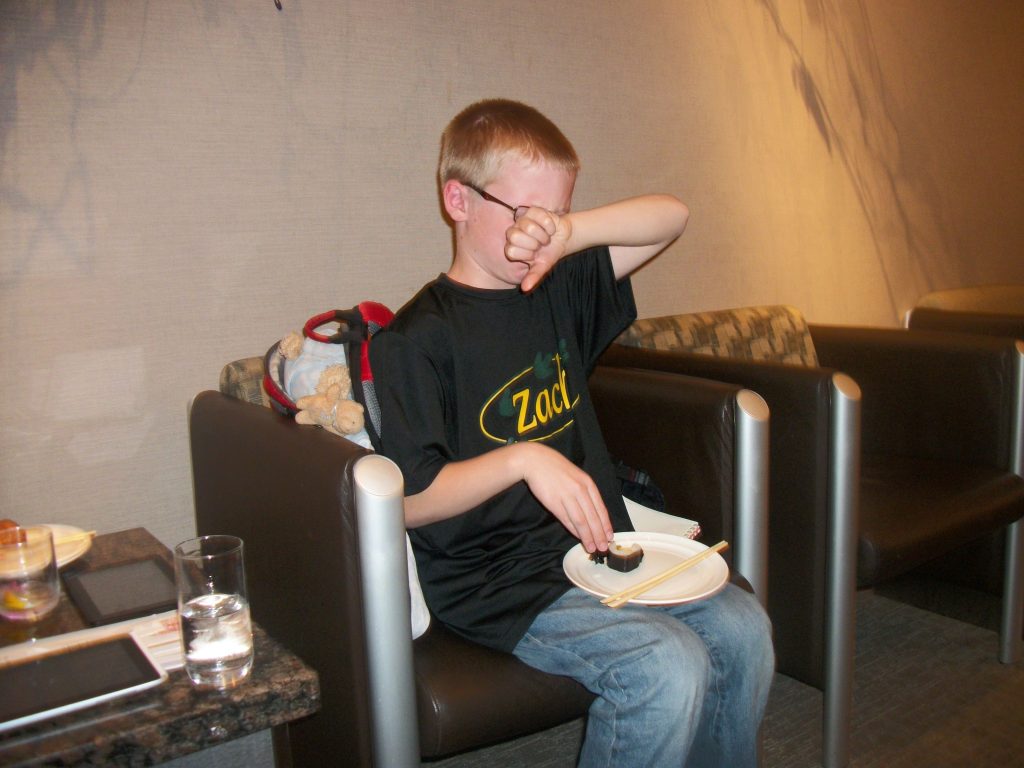 We really enjoyed the food in Japan.  It was something I was very nervous about, but proved to be amazing!  I am looking forward to trying to make a few of the things we had at home soon.

I hope you enjoyed the Japan series!  If I missed anything, or you have questions, please let me know!