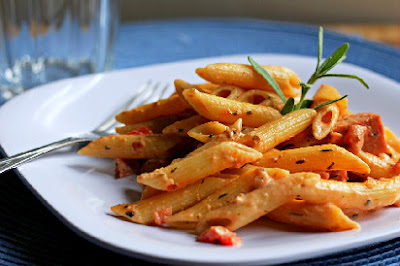 I saw this recipe on That Skinny Chick can Bake awhile ago.  I was immediately sold!  I had tomatoes and rosemary in my garden, and this was the perfect thing to use them in.  Well, I couldn’t wait for my tomatoes – they just aren’t turning red!  So I used canned tomatoes, and it awesome! As I told you the other day, I am cleaning my kitchen.  That doesn’t just include getting rid of magazines and glasses that that were my parents, and haven’t been used in 10 years.  That means my freezer and pantry as well.  So I had tomatoes that had been in the pantry forever, I have box upon box of pasta, and I had heavy cream from making this ice cream, that needed to get used.  So I was set!

I wanted to lighten the recipe up just a tad – so I used turkey sausage, and cut back on the cream and cheese.  If you can’t find Italian Turkey Sausage you can use just plain turkey sausage and add Italian seasoning while cooking.  I was out of onion, so I didn’t use that part.  I will leave it in the recipe though, because normally I would have put it in!

My 6 year old absolutely LOVED this!  He was skeptical at first, took his first bite….immediately I heard “mmmm”!  I just started laughing, and he didn’t get it.  He had no idea he vocally told me he liked it.  He told me he wanted me to dare him to eat leftovers the next day (he hates leftovers), but this he ate.  So thanks Liz for a great recipe!

Cook Pasta according to the package directions.

Saute the onion in the olive oil until soft.  Add the sausage.  Brown for a few minutes.  Add rosemary, bay leaves, and crushed red pepper.  Add the tomatoes.  Cook until bubbly and hot.

Add the cooked pasta, cream and cheese to the tomatoes.  Toss until well combined.  Serve with additional cheese if desired. 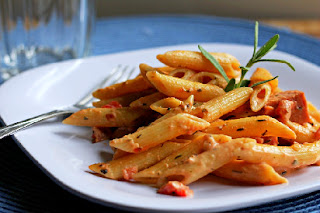